Please join us on Nov. 11 for our 2016 Tulsa Celebration Gala as we celebrate 10 years of Advocacy from the Oklahoma Chapter of the Council on American-Islamic Relations.

Linda Sarsour is an award winning Brooklyn born Palestinian-American-Muslim racial justice and civil rights activist, community organizer, social media maverick, and mother of three. Linda has been at the forefront of major social justice campaigns both locally in New York City and nationally. She is the Executive Director of the Arab American Association of New York, co-founder of Muslims for Ferguson, and a member of the NY Justice League. Linda is most notably recognized for her focus on intersectional movement building.

Jeremy McLellan is a standup comedian based in Charleston, SC where he won the 2015 and 2016 Charleston Standup Comedy Competition and was named Best Local Comic in the Charleston City Paper. In addition to telling jokes all over the country he has also performed with TJ Miller, Todd Barry, Tig Notaro, Mark Normand and others. Never one to shy away from controversy, his material covers a wide range of hot-button topics like politics, gender, race, disability, religion, and Santa Claus. 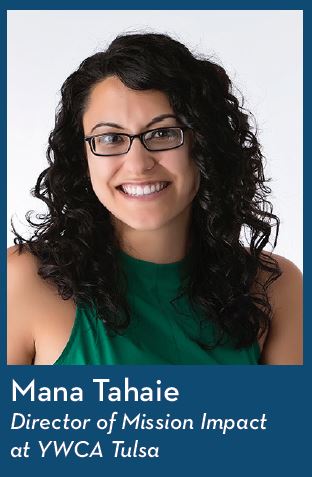 Mana Tahaie has led the YWCA’s racial justice initiatives since 2008. Under her leadership, the Racial Justice department has grown to include antiracism training, community events, organizational consulting, racial dialogue groups, collaborations, and advocacy. She brings with her an analysis of power, organizational and institutional development, and identity-based oppression.

The first in her Iranian family to be born in the U.S., Mana has lived in Oklahoma most of her life (with a brief stint in California for elementary school), moving to Tulsa to study Political Science at The University of Tulsa.

An advocate for ending oppression in all forms, Mana has devoted her career and personal life to social justice. 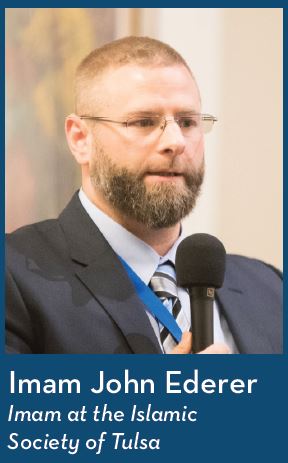 John Ederer was born and raised in Oklahoma. He began soul searching in 1998, after researching philosophy, comparative religion and psychology, he found solace and soul nourishment while reading a translation of the Qur’an, which led him to accept Islam as his way of life.

In 2002, he took a scholarship with Islamic American University where he began his journey of seeking sacred knowledge on a full-time basis. He then spend the next 6 years in traditional and formal studies attaining a certification of mastery in Arabic from Egypt, a diploma in Islamic studies from Kuwait and a licence in the Holy Quran.